Arch | Strata | Antioch is EAA Emre Arolat Architecture’s exhibition for their Museum Hotel project in Antioch, Turkey. It was exhibited in Palazzo Bembo, as part of the 15th International Architecture Exhibition at La Biennale di Venezia in 2016. M. Can Tanyeli created the three documentary films of the exhibition.

The 02’30” long companion film to the exhibition’s large scale model depicts the construction process in all of its glory in full 4K resolution. Composed of videos and photographs captured by both Sarraf | Galeyan | Mekanik and EAA, it focuses on visual details of the extremely complicated construction process the building has underwent. You can watch it here. 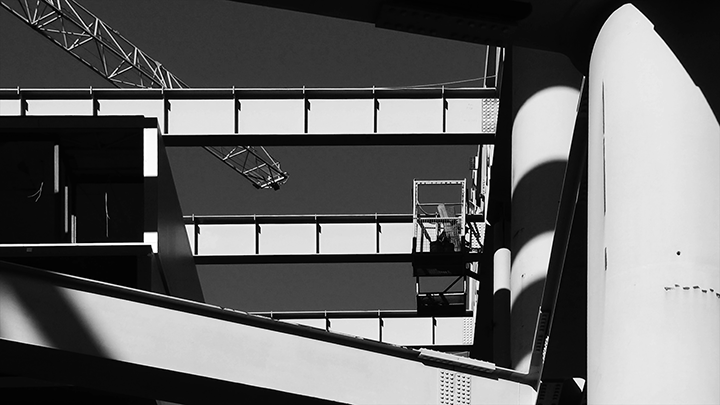 Between June 2013 and December 2014, during the most critical phase of the construction of the Museum Hotel, Sarraf | Galeyan | Mekanik team (M. Can Tanyeli, Erhun Erdogan and E. Seda Kayim) collected tens of hours of footage and tens of thousands of timelapse photographs from the construction site in Antioch. In addition to SGM’s work, EAA’s own team members and other commissioned photographers such as Cemal Emden also extensively documented this extraordinary structure and its massive undertaking during various stages of its construction. Hand picked from this enormous archive, the collection of images, as well as the sounds and noises of heavy machinery, and violent metallic sounds this short film contains tell the audio-visual story of a larger-than-life construction and the brutal and industrial lengths an architectural venture has to go to in order to achieve the contrasting delicacy it yearns for.

The 11’09” long documentary feature tells the story of the design and construction of the museum hotel. It focuses on the challenges of envisioning a massive structure situated above a fragile archeological dig site, as well as realizing it with such technical precision that the historic remains are preserved in pristine condition. 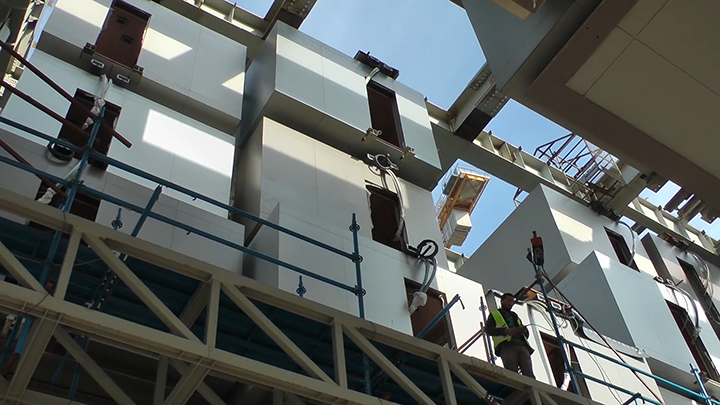 This film opens with initial footage acquired back in 2011. At this stage, the construction hardly resembled the magnitude of the design, yet its delicate interaction with the archaeological dig site was already apparent. All of the foundation wells for the steel pillars had to be hand-dug, since heavy construction equipment were not allowed to venture into the site. The documentary features never before seen footage of the mosaics discovered inside the site, especially the one beneath the G2 pillar, and showcases how their placement affected the design even after the construction had already picked up significant speed. The film tells the story of how each individual piece of the construction was assembled and transferred into the site, particularly the container-style room units. Using footage from the assembly line of the hotel rooms and their transfers to the construction site on the streets of Antioch, the documentary follows the story of a single room unit, showing how it was made, transferred and placed on the steel beams to await decoration. 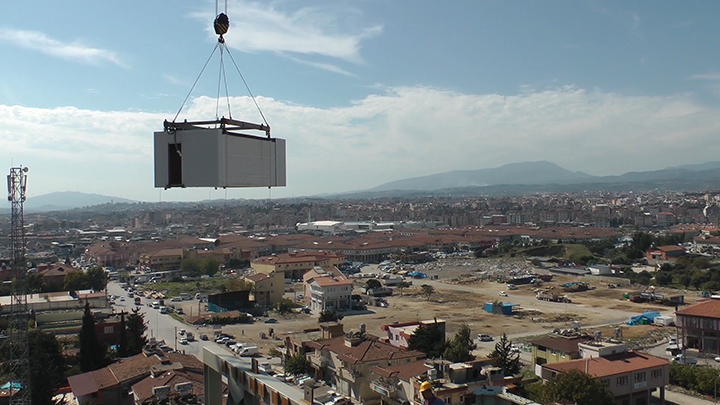 In addition to this industrial process, there is the ongoing mission to preserve and protect the archaeological remains. While the structure keeps on rising overhead, preservation experts continue working on the site; documenting every stone, preserving every single shard of mosaic, cleaning every marble surface and getting ready for the big public reveal to come. With the imagery of construction juxtaposed to the backdrop of an archaeological site, the documentary aims to narrate a story of balance: balance between a modernist structure with masonry remains that are unearthed after a millennia, balance between exhilarating voids and luxurious close quarters, balance between the necessary haste of a commercial venture and the slow approach of an academic undertaking, balance between construction and preservation, and balance between an overtly customer-centric hotel establishment and a public use museum institution.

The third and final, 07’30” long film is an interview with architectural historian Ugur Tanyeli. The film focuses on the theoretical approach of the project, and seeks to establish it as the last meaningful attempt to create a modular Metabolist structure which as an idea garnered the attention of modern architecture in the 70’s. You can watch it here.

More from this Gallery