The Mall from M. Can Tanyeli on Vimeo.

Ever felt like, in a moment of transit, you are witnessing a temporary, yet awe-inspiring fraction of space-time, ephemeral in length but epic in proportions? Much like the spine-tingling part of a song you’ve been listening to over and over again, just so you can hear that one part that you wish was longer again? Maybe it’s because that moment is exceptionally loud and colorful, suspenseful, heart-racing, or even thrilling in a terrifyingly uncanny splendor, yet always oddly satisfying. This project turns one of these short moments into an everlasting reality, so you can experience it as much as you want without having to circle back.

A personal project by M. Can Tanyeli, The Mall is an experimental film that depicts the empty parking lot of an American suburban mall at midnight during an approaching thunderstorm in a looping, never-ending moment of transit. Its boundaries are unclear, its exit, non-existing. You can enjoy this seemingly derelict non-space as much as you want, or at least until the time it becomes prolix. 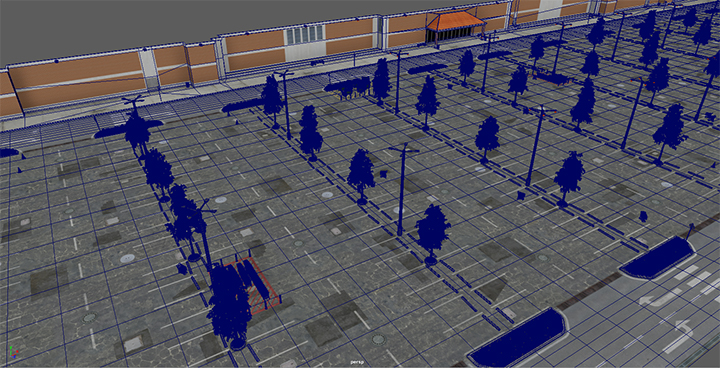 The Mall was created in full CG as a part of “Yaşayan Mekan Yaşanan Mekan” workshop by GAPO between December 2017 and January 2018 in SALT Galata. It was also screened at the walk-in cinema as a part of 4th Istanbul Design Biennial between September 22 and November 4 2018.

Modelled in Maya, texture generation with Photoshop and Quixel NDo, rendered with VRay, post in After Effects and edited with Premiere Pro.

More from this Gallery