Shooting timelapse footage is hard. The process requires an obsessively detailed level of planning – to the point where you will never be sure if you are ready to begin shooting your footage. You have to place the camera in the correct spot and secure it so it doesn’t even nudge, plan the motion of the camera over a large span of time if you are shooting it in motion and pay attention to the changes in lighting conditions if you are shooting outdoors.

There are numerous problems you will surely face. The “blimps” in raw footage, ugly “ghosts” in post-production, the infamous “golden hour” if you want to timelapse shoot a sunrise or a sunset… Even the durability of your camera comes into question. If you are shooting outdoors and under scorching sunlight, chances are your camera will start overheating even without pushing its limits. The amount of shots your footage is going to take to complete will surely waste some of your camera’s sensor life. There are lots to consider.

Our trials and errors with timelapses have been few so far, but we did learn some valuable things on the way.

Our first trial in a timelapse in motion was also a very stressful one. We had one shot at doing it, we had no chance of correction during or after the shooting, and a repeat attempt was absolutely out of the question. Cue our 220 kilometers long, 10 hour commute in Istanbul: 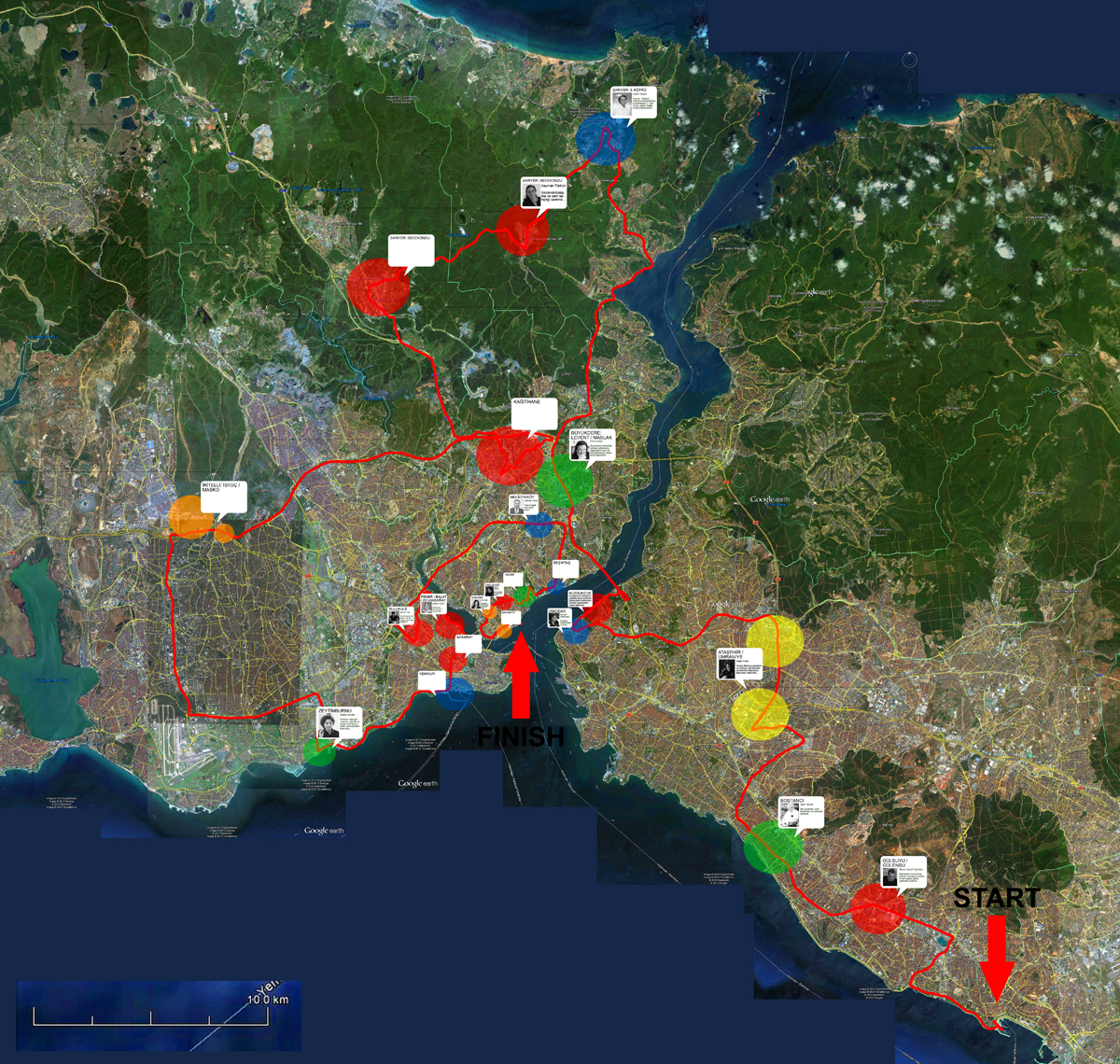 Made out of 10.727 images and 3 videos, this 7 minute footage of our 10 hour journey had multiple problems, as well as some achievements.

The first (and main) problem is the lighting conditions. Even though we were shooting at the end of the summer with clear skies and a considerably consistent sunlight, the motion itself is so unpredictable, there is simply no way to prepare for it manually. We knew from the beginning that we had to shoot this in an automatic mode. In order to have smallest jumps possible in exposure levels, we set the ISO level manually. For having a constant level of focus with utmost clarity, we also set the F-Stop manually. Exposure time, however, was automatic.

This resulted in a couple of things: There are flickers. This is unavoidable and we had to correct it digitally –and automatically, try editing 10.727 frames manually, I dare you– in post-production. There are also places where there seems to be no correction made at all, or not enough correction. There are two reasons for this. One, some places simply cannot be corrected to match adjacent frames with the level of color depth we had. If you can shoot 10.727 RAW images on a camera strapped to a moving vehicle, let alone process it later, then you are a lucky person and please stop reading this because you obviously have enough time, resources and experience to know what you are doing. However, with 24-bit JPEG images, you can only correct so far.

The other reason for the seemingly lack of correction is overall lightness in images. In some images, there are more shadows, darker objects or overhanging tree branches that block the skylight. Even when the color and lightness of the sky matches the adjacent frames in these images, the overall lightness of the scene in considerably lower than others; therefore the entire image acts as a “blimp”. There is a sudden jolt in the brightness of the movie. In these scenes, you can either sacrifice the entire frame and jump ahead abruptly, or leave it and let it blimp. I personally do not consider hand painting darker objects as an option, because I don’t like the idea of pausing the scene at that exact frame and noticing that, while the lightness may match the adjacent frames, the image in itself is manipulated in an obvious way. Moving on…

The second problem is the motion itself. While Erhun has driven the car like a true professional wheelman, not every road feels the same. Wide open spaces with long straights like major arteries and huge freeways are excellent for timelapse shooting. Cramped up neighborhoods, not so much… There are too many twists and turns and the footage gets progressively worse until the point the audience loses all bearings as to where the camera is pointed at, or even in which direction the car is moving towards. I could have edited the beginning of an open space to the end of a twisting road 2 hours apart and you wouldn’t have noticed the difference.

Solution? Shorter intervals between each shot. This will surely result in a larger data set to process, but it also means you can stretch the cramped up neighborhoods, while compressing longer freeways. Most of our footage on tight roads was shot at a speed of 20 to 40km/h and with 3 second intervals. We couldn’t have gone any slower, since ours was not the only car on the road, but we could have decreased the interval to 2 seconds or maybe even less.

Also related, there are the traffic jams. That vision murdering jumping effect you see during congestions is what I call, the “Typewriter Effect”. The car in front of you moves forwards, and a second later you follow suit. The resulting sequence of images shows the same cars moving back and forth towards the camera, like the typefaces in a typewriter, hitting the paper and moving back into position, hence the “Typewriter Effect”. Nothing you can do about that. Avoid traffic if you can. Good luck with that if you live in Istanbul.

In the case of a timelapsed road trip, a potential solution comes into mind. Using neutral density filters for forcing long exposure times could have solved a lot of our problems. The motion would have been a lot smoother; therefore the parts where we were travelling on narrow roads and smaller neighborhoods might have looked better. The typewriter effect might have been not so disturbing, and the final footage might have had less blimps and ghosting. Or maybe not, let’s think about it…

I thought about using ND filters for stretching exposure times, but we were already experimenting with more than we were comfortable with. Plus, the only ND filters I could find, believe it or not, were ND-10. Meaning they put extra ten F-Stops on top of our manually set F-Stop level. ND-10, simply put, is a damn welding mask. Add the polarizing filter for better sky color, and you get little or no light into the camera. This means you can stretch the exposure times up to, I don’t know, 10 seconds or even more. I’ll be honest, I never tried using ND filters before, and I know I have to learn to use them at some point; but this wasn’t the time.

Consider the light: We set out from Kartal, our starting line for the journey, at 9 am. The sunlight got brighter and brighter until it was noon. After that, the lighting conditions deteriorated exponentially until we finished shooting at 6:30 pm. Now I know for a fact that our exposure times without the ND filter ranged between 1/240 of a second and 1 second. That’s a 241/242 of a second gap between the slowest and the fastest shots. Using the ND filter, the gap would have been larger for sure. So how do we set the intervals? If we used ND-2 or ND-4, we might have set the intervals to 6 seconds or less, but then again, we had no way to be sure. Even if we were sure about everything, the intervals are quite long for stretching the overall length of the timelapse. We would have had better image quality maybe, but also surely a shorter final product.

And if we forget about the intervals altogether and set the intervalometer to shoot one frame after another with no time in between and with automatic exposure, we would lose all sense of time. Also, imagine if at the moment the camera calculates for light, we hit a dark spot. The camera would think that it requires 6 seconds to gather enough light, and if we move past the dark spot immediately as the camera takes the shot; the whole image might turn into a white plate, or vice versa. And since we have no way of controlling the length of exposure and the intervals in between shots, we would have had most of our frames bunched up around noon time (less time to take each shot means more shots if there is no fixed interval) and we would have had poor motion detail after 4 pm.

Even if we set our camera fully manually and fixed the exposure time, we would have had to change ND filters on the fly. We had 2 gas and “bare necessities” stops along the way to our destination; this means that we could have used 3 separate ND filters. Start with ND-6, drop down to ND-5, and then maybe to ND-2. Not that any of this is important, because we had to film some of the scenes by changing the camera mode on our Canon 7D as we were inside the car and in motion. The ND filters would have surely prevented that.

The only thing we could have done that I think we should have done, is to decrease the interval time and increase the number of shots. Instead of 10.727 images, we would have gotten, I don’t know, 20.000 shots, but it’s worth it.

Enough with ‘if’s and ‘but’s and ‘maybe’s… What DID we achieve? Well we figured out how we could place a camera on top of a car and keep it there for hours. Yes, as you might have guessed, we used suction cups. Lots of suction cups. Under normal conditions, we could have gone with a lot less, but we needed the camera to stay in position for 10 hours straight. During this time, we accelerated and decelerated countless times, got up to speeds of 90km/h, cornered tight bends and had our car sit in traffic jams under the summer sun, only to allow it to be air-cooled on a fast freeway a few moments later. Personally, I think it was a miracle the cups didn’t come off. 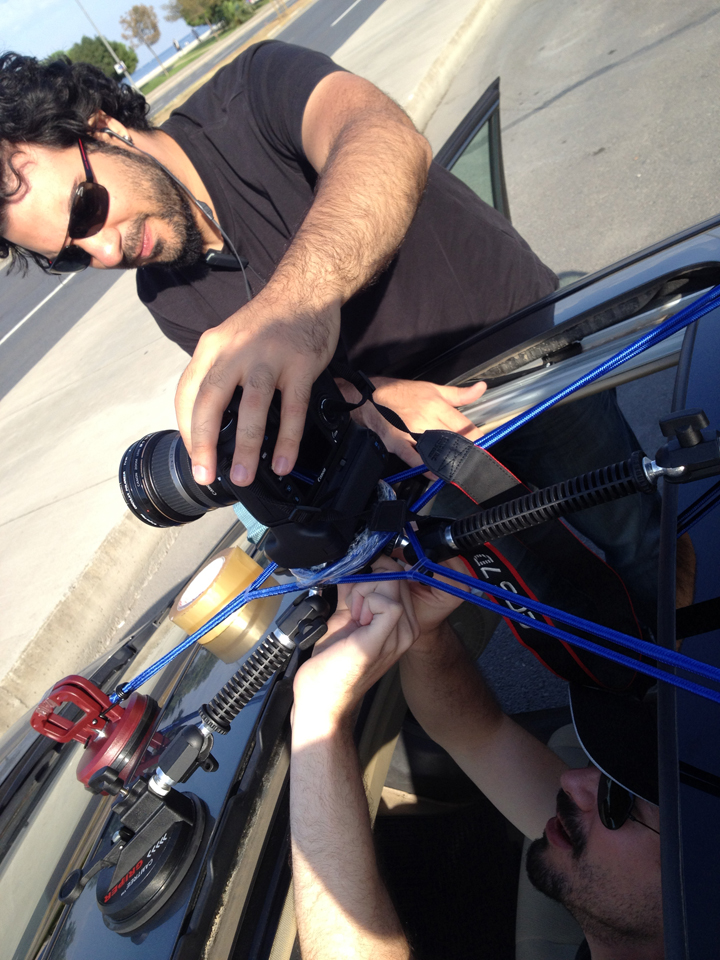 We have seen some odd stares and gathered funny moments along the way, and some of the more suspicious neighborhoods were less than entertained, since they immediately realized that there was in fact a camera on top of our car, taking pictures of their streets. Looking back though, it was all in good fun. It was quite the experience, and I don’t think we’ll want to do it again anytime soon. Most of the time we weren’t sure if it would work out as we expected and the constant fear of failing got to me a couple of times. I was so afraid that the suction cups would fail and the camera would fall and get crushed by the vehicle behind us, I literally strapped myself to the camera with a safety harness. At some point near the end of our journey, I remember walking out of the car just to prevent a beggar from approaching the driver side window of our car. I have to admit, that wasn’t very civil of me, but in my defense I have been on the road for 8 hours straight and wasn’t about to waste the footage because some curious guy decided to touch the rig on top of my car.

We also proved that it CAN be done. The final raw footage needed a lot of work (which as you can see, we had little time to attend to) and there are so many places where it’s not fun to watch; but all in all, I think it’s a good and honest documentation effort.

And that moment of joy and fatigue you see in the final scene… Well, that’s real, believe me.